03/26/10  A little outdated but still the front page article on their webpage. 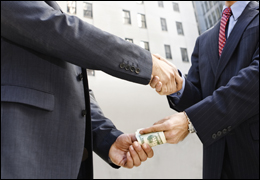 Public corruption is a breach of trust by federal, state, or local officials—often with the help of private sector accomplices. It’s also the FBI’s top criminal investigative priority. To explain why the Bureau takes public corruption so seriously and how we investigate, we talked with Special Agent Patrick Bohrer, assistant section chief of our Public Corruption/Civil Rights program at FBI Headquarters.

Question: Why is public corruption so high on the FBI’s list of investigative priorities?
Answer: Because of its impact. Corrupt public officials undermine our country’s national security, our overall safety, the public trust, and confidence in the U.S. government, wasting billions of dollars along the way. This corruption can tarnish virtually every aspect of society. For example, a border official might take a bribe, knowingly or unknowingly letting in a truck containing weapons of mass destruction. Or corrupt state legislators could cast deciding votes on a bill providing funding or other benefits to a company for the wrong reasons. Or at the local level, a building inspector might be paid to overlook some bad wiring, which could cause a deadly fire down the road.

Q: Can you describe the kinds of public corruption that the FBI investigates?
A: It really runs the gamut. Bribery is the most common. But there’s also extortion, embezzlement, racketeering, kickbacks, and money laundering, as well as wire, mail, bank, and tax fraud. Right now, based on our intelligence on emerging trends, we are focused specifically on several major issues: corruption along our national borders; corrupt officials who take advantage of natural disasters or economic crises to divert some of the government’s aid into their own pockets; and a myriad of officials who may personally benefit from the economic stimulus funding.

Q: Where do you find this corruption?
A: Just about everywhere—at the federal, state, and local levels throughout the country. And I should point out, the vast majority of our country’s public officials are honest and work hard to improve the lives of the American people. But a small number make decisions for the wrong reasons—usually, to line their own pockets or those of friends and family. These people can be found—and have been found—in legislatures, courts, city halls, law enforcement departments, school and zoning boards, government agencies of all kinds (including those that regulate elections and transportation), and even companies that do business with government.

Q: How does the FBI investigate public corruption?
A: We’re in a unique position to investigate allegations of public corruption. Our lawful use of sophisticated investigative tools and methods—like undercover operations, court-authorized electronic surveillance, and informants—often gives us a front-row seat to witness the actual exchange of bribe money or a backroom handshake that seals an illegal deal…and enough evidence to send the culprits to prison. But we have plenty of help. We often work in conjunction with the inspector general offices from various federal agencies, as well as with our state and local partners. And we depend greatly on assistance from the public. So let me end by saying, if anyone out there has any information about potential wrongdoing by a public official, please submit a tip online or contact your local FBI field office. Your help really makes a difference.

Seriously? My experience with the lazy FBI agent. This is my life you have taken. Do you understand being gang raped? The damage done?

I have taken 1 step forward and 10 steps backward. Let me tell you how my interaction has developed with the FBI. I actually have made contact with an agent at the Federal level and it has been a difficult task that is not nearly over and done with to my satisfaction by any means. The article above talks about wasted money, in my case I can identify wasted money as in the local division agent actually getting taxpayers money for doing nothing that is described as an investigation. I began seeking assistance from the FBI in 2007. My case if reviewed any reasonable person could recognize, clearly supports local government corruption. I do not care who you are if you do not understand that private property rights are protected, Federally guaranteed to every citizen. It makes no difference for those who want to argue, these rights are protected by the Constitutional law, by natural law, or by God’s law. These are unalienable rights never to be taken. It’s been well over a year since I first contacted this local agent. I had a vision of how this would play out. I was totally disillusioned to the reality of how this really works. I contacted the FBI numerous times since 2007. It was always a quick excuse to why they cannot assist and goodbye. To have the opportunity to speak directly is nonexistent. I did write to my US Senator in 2007 requesting that he help me get my case investigated. Initially he blew me off probably thinking that I was “crazy”. The difference in this case is if Mr. Senator had that opinion he kept it as a thought. Unlike my local government officials who defamed my character by making statements that I was “crazy” with intent to give the general public an unfavorable opinion of my character. Defamation of character is a violation of Federal Law 28 U.S. Code § 4101 – Definitions

In this case it would be suitable to bring Federal charges for torture 18 U.S. Code § 2340

This site uses Akismet to reduce spam. Learn how your comment data is processed.

Follow Violation of Federally protected Rights under Color of Law on WordPress.com

About the Good old Boy Network

Poisoned By My Neighbor From Hell

Calling out the City, County, State and Federal officials who allowed me to be tortured under color of law.

A Forum Devoted to the Foreign Corrupt Practices Act

Quantum Investigations
No Court Officer is Above the Law

Fighting Public Corruption Should Be A Priority

Watts Up With That?

The world's most viewed site on global warming and climate change

But Now You Know

The search for truth in human action

Watching our environment ... our health ... and corporations ... exposing lies and corruption

"Weaving should be fun!"

Your Life, Your Choice

Pleasant Musings on Sociology, McMansions and Housing, Suburbs and Cities, and Miscellaneous Errata.

Resisting and challenging obstacles to the Good of Humanity

Scanned Retina - A Resource for the People!

For the adults in the room!

Traveling Our Path Together

Reflections on life and other things we like to think about

A Journal of Democracy and Public Affairs

Watching Over Liberty and American Values

GetOffYourButts.com
News You May Not Have Heard About

A rural perspective with a blue tint by Ele Ludemann

Blame is the name of the game.

Dedicated to freedom in our lifetimes

In Defense of Liberty

The Latest News and Commentary from The Goldwater Institute

We Declare that politicians must obey written laws as written. No "interpretation," no ifs, ands or buts. This is the official blog of Andy Horning.

When Judges are politically selected, the Judges will themselves become politicians.

"It is the duty of the patriot to protect his country from his government." - Thomas Paine

Shedding Light on the Narcissist

When Government Fails US

Fight for Freedom from the Prohibition of Your Freedoms