AUSA Kevin VanderSchel has advised that my emails go to his spam. So if any of you have a connection with him please forward this to him, I am not done defending myself against his accusations. Tell him to offer up some evidence supporting his opinions.

The basis of my complaint has long been that nobody has reviewed my evidence. It is clear to me that the failure to competently review my evidence it for the purpose of continuing my suffering. The evidence is indisputable. Private property rights are Federally protected. Nobody has the right to violate Federally protected rights.  For my government to use chemical weapons with intent to cause physical harm is terrorism. Whether there is a actual law against terrorism in the US or not, that is what this was. According the FBI Agent Reinwart there is a law against supporters of terrorists. If that is the case there are many government officials who have supported acts of terrorism in this case. The motive to eliminate me from my private property violates my 4th,  5th  and 14 amendments guaranteed by Federal law. 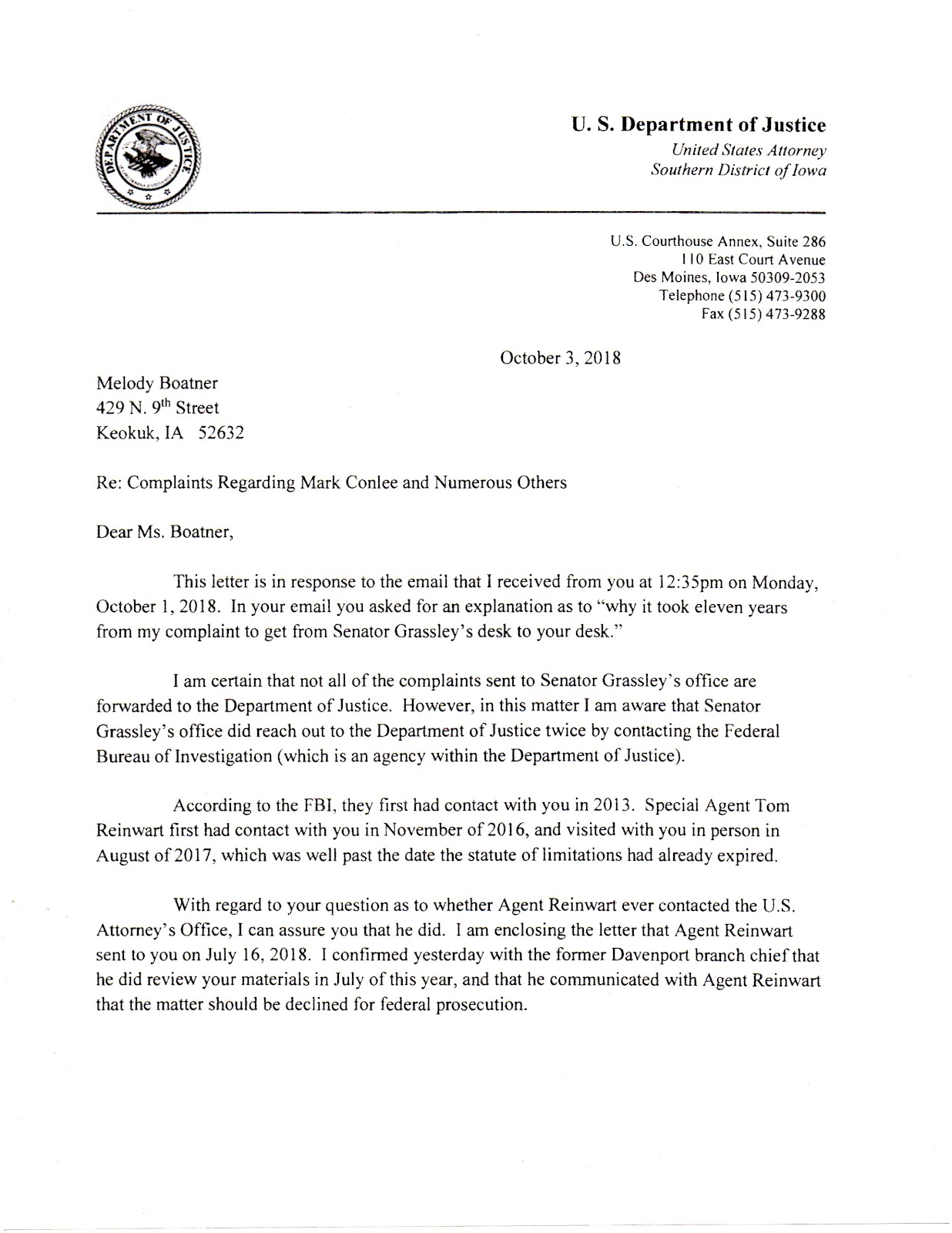 Authors Note;  There has been nobody that has reviewed my evidence! The statement that the former Davenport branch chief reviewed my materials is false. You assumption as to when I contacted the FBI is completely false. The fact is that, Grassley’s assistant advised me that the FBI would contact me.  Senator Grassley requested 2 inquiries on my behalf advising me that the FBI would contact me never happened. I reached out to the FBI division that covers my area, not before Sheriff Weber contacted a friend (former branch chief) of his and put his own spin on the story. The former Davenport branch chief did NOT review my materials. Either he is lying or you are lying. Where is the evidence that he reviewed my evidence? Those conversations are recorded. I stand by my statement that the only conversation was him advising me that the Statute of limitations had expired conversation ended. He was not interested in anything I had to tell him about my situation.  What was the former branch director Jeff Huber basing his information on. There is no evidence of Huber reviewing my materials as you claim because it never happened. FBI agent Thomas Reinwart came to my home specifically to review my hard copy evidence. Upon arrival he informed me that he had no intention of reviewing my hard copy evidence. He advised me to verbally tell him my story. I protested advising him it was not possible to tell this story because there are too many tentacles to tell this story.  The only way a person could fully understand the magnitude of the egregious acts committed against me is to personally  review the hard copy evidence that fills 3 + three ring binders. This is the standard procedure used in any type of investigation. I have understood hearsay is not evidence since I was in high school. Unless the laws regarding hearsay have changed that procedure stands.

Your repeated attempt to question my credibility is obvious. Having refused to review my evidence seems quite relevant in your continued defamation of my character.  I take offense to your berating of my character based on the documented accounts of all government officials being found guilty of ethical violations.

You yourself have given me reason to question your ability to read and comprehend documents that I have submitted to you. For example our first correspondence you stated that my allegation occurred between 2002-2004. When that is clearly not the information the evidence you reviewed showed. I don’t believe you could have possibly read the evidence and come up with  that conclusion. Perhaps you should not take hearsay from any of you colleagues as fact and only use hard copy evidence to make credible determination about any issues brought before you.

I am stating in no uncertain terms that, I was advised that Senator Grassley was forwarding all the evidence I was sending him to the FBI since 2007, he has been advising me that he was doing this.  That’s what I was told and I have the email evidence to prove this is a fact.

I am aware that Sheriff Stacy Weber gave information to Jeff Huber and that information was then given to Agent Reinwart.

I know for a fact that Sheriff Weber has no hard copy information about my case. I know for a fact that any information Sheriff Weber thinks he has, is based on hearsay from the opposing party. Sheriff Weber has been involved in protecting the opposing party. This was taking place in 2017, I did not post all my evidence on my website simply for personal safety issues. I requested Reinwart share the information that he received from the third party by Sheriff Weber. Reinwart  refused to share the information with me. If he had and he should have, if he were doing a competent investigation I would have had the opportunity to submit conflicting evidence with the hearsay evidence that was given to Agent Reinwart.

The last sentence in most of our correspondence offends me as a victim and a former taxpayer. You generally close with the statement that your office will not put anymore resources into my case. That may be acceptable, if you had put any effort into a competent investigation into my allegations, you have not.  As an Assistant US Attorney your failure to recognize that private property rights are Federally protected gives me the opinion that you are not qualified in your duty to uphold the Constitution of the United States. These rights can be found in the 4th, 5th and 14th Amendments of the Bill of Rights.

This site uses Akismet to reduce spam. Learn how your comment data is processed.

Follow Violation of Federally protected Rights under Color of Law on WordPress.com

About the Good old Boy Network

Poisoned By My Neighbor From Hell

Calling out the City, County, State and Federal officials who allowed me to be tortured under color of law.

A Forum Devoted to the Foreign Corrupt Practices Act

Quantum Investigations
No Court Officer is Above the Law

Fighting Public Corruption Should Be A Priority

Watts Up With That?

The world's most viewed site on global warming and climate change

But Now You Know

The search for truth in human action

Watching our environment ... our health ... and corporations ... exposing lies and corruption

"Weaving should be fun!"

Your Life, Your Choice

Pleasant Musings on Sociology, McMansions and Housing, Suburbs and Cities, and Miscellaneous Errata.

Resisting and challenging obstacles to the Good of Humanity

Scanned Retina - A Resource for the People!

For the adults in the room!

Traveling Our Path Together

Reflections on life and other things we like to think about

A Journal of Democracy and Public Affairs

Watching Over Liberty and American Values

GetOffYourButts.com
News You May Not Have Heard About

A rural perspective with a blue tint by Ele Ludemann

Blame is the name of the game.

Dedicated to freedom in our lifetimes

In Defense of Liberty

The Latest News and Commentary from The Goldwater Institute

We Declare that politicians must obey written laws as written. No "interpretation," no ifs, ands or buts. This is the official blog of Andy Horning.

When Judges are politically selected, the Judges will themselves become politicians.

"It is the duty of the patriot to protect his country from his government." - Thomas Paine

Shedding Light on the Narcissist

When Government Fails US

Fight for Freedom from the Prohibition of Your Freedoms